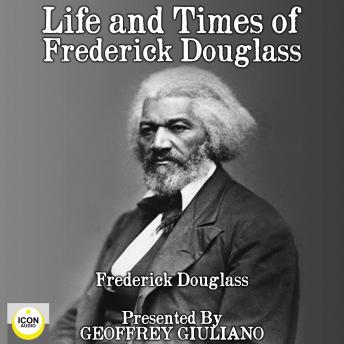 Life and Times of Frederick Douglass

Frederick Douglass was an American social reformer, abolitionist, orator, writer, and statesman. After escaping from slavery in Maryland, he became a national leader of the abolitionist movement in Massachusetts and New York, gaining note for his oratory and incisive antislavery writings. Accordingly, he was described by abolitionists in his time as a living counter-example to slaveholders' arguments that slaves lacked the intellectual capacity to function as independent American citizens. Likewise, Northerners at the time found it hard to believe that such a great orator had once been a slave.This is his story.
Edited by Macc Kay
Production executive Avalon Giuliano
ICON Intern Eden Giuliano
Music By AudioNautix With Their Kind Permission
©2020 Eden Garret Giuliano (P) Eden Garret Giuliano
Geoffrey Giuliano is the author of over thirty internationally bestselling biographies, including the London Sunday Times bestseller Blackbird: The Life and Times of Paul McCartney and Dark Horse: The Private Life of George Harrison. He can be heard on the Westwood One Radio Network and has wri
tten and produced over seven hundred original spoken-word albums and video documentaries on various aspects of popular culture. He is also a well known movie actor.

Life and Times of Frederick Douglass