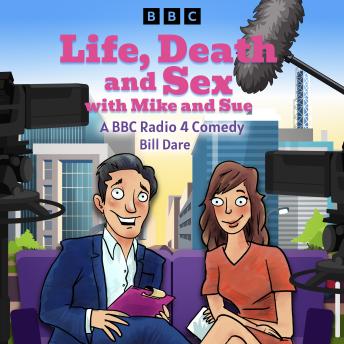 Sit back, dip your biscuit in your tea, and relax... because Mike and Sue are here! In each episode of this mid-morning spoof, the sofa-bound host couple Mike and Sue and their live studio audience tackle various topics of the day - no matter how clumsily.

Ranging from shopping addictions and teenagers to cults and holidays, the programme intersperses studio segments with sketches on the day's topics, so if you've ever wanted to know what gardening and terrorism have in common, or what the wider public really feels about marriage, listen up. Plus: could therapy have helped Henry VIII, what are the most dangerous ducks, and will Mike and Sue win the TV award that, surely, everyone knows they deserve? Plus a moving appeal on behalf of actors who make moving appeals.

Starring Jan Ravens (Dead Ringers, Spitting Image), Robert Duncan (Old Harry's Game, Drop the Dead Donkey), Sally Phillips (Miranda, Smack the Pony), Steve Punt (The Now Show, Horrible Histories), Tracy-Ann Oberman (Friday Night Dinner, Toast of London), Alistair McGowan (The Big Impression, Have I Got News for You), Ronni Ancona (Last Tango in Halifax, The Big Impression), and many more. This four-series run will scratch any itch you have for mid-morning mayhem, no matter the time of day, and is just the thing for fans of The Now Show and Knowing Me, Knowing You.

This title is due for release on March 23, 2023
We'll send you an email as soon as it is available!