A Life Decoded: My Genome---My Life 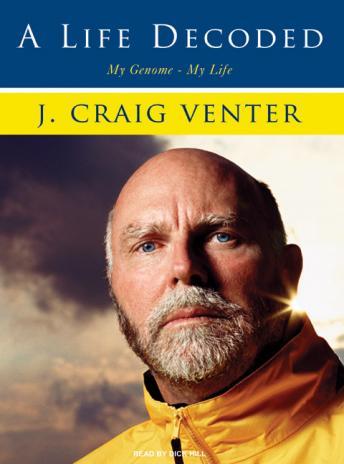 Growing up in California, J. Craig Venter didn't appear to have much of a future. An unremarkable student, he nearly flunked out of high school. After being drafted into the army, he enlisted in the navy and went to Vietnam, where the life-and-death struggles he encountered as a medic piqued his interest in science and medicine. After pursuing his advanced degrees, Venter quickly established himself as a brilliant and outspoken scientist. In 1984, he joined the National Institutes of Health, where he introduced novel techniques for rapid gene discovery, and left in 1991 to form his own nonprofit genomics research center, where he sequenced the first genome in history in 1995. In 1998, he announced that he would successfully sequence the human genome years earlier and for far less money than the government-sponsored Human Genome Project would-a prediction that came to pass in 2001.

A Life Decoded is the triumphant story of one of the most fascinating and controversial figures in science today. In this riveting and inspiring account, Venter tells of the unparalleled drama of the quest for the human genome, a tale that involves as much politics as science. He also reveals how he went on to be the first to read and interpret his own genome and what it will mean for all of us to do the same. He describes his recent sailing expedition to sequence microbial life in the ocean, as well as his groundbreaking attempt to create synthetic life. Here is one of the key scientific chronicles of our lifetime, as told by the man who beat the odds to make it happen.

This title is due for release on November 22, 2007
We'll send you an email as soon as it is available!