Life in a Medieval City 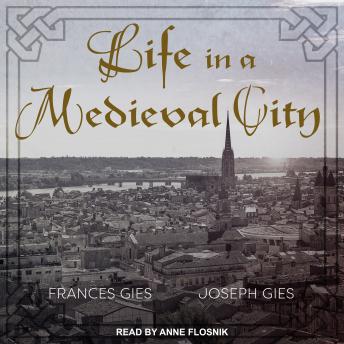 Life in a Medieval City is the classic account of the year 1250 in the city of Troyes, in modern-day France. Acclaimed historians Frances and Joseph Gies focus on a high point of medieval civilization-before war and the Black Death ravaged Europe-providing a fascinating window into the sophistication of a period we too often dismiss as backward.

Urban life in the Middle Ages revolved around the home, often a mixed-use dwelling for burghers with a store or workshop on the ground floor and living quarters upstairs. A developed economy, focusing on textiles, farming, and financial services, could be found in the town center, where craftsmen competed for business while adhering to the guilds' codes of conduct. There were schools for the children, though only boys could attend and the lessons were taught in Latin by a priest. The church was a hub of both religious and civic life; services were lively and filled with song, and baptisms and other special occasions brought neighbors together to celebrate. The weddings of wealthier townsfolk were lavish affairs full of song and dance and drinking that could sometimes last for weeks.

Life in a Medieval City