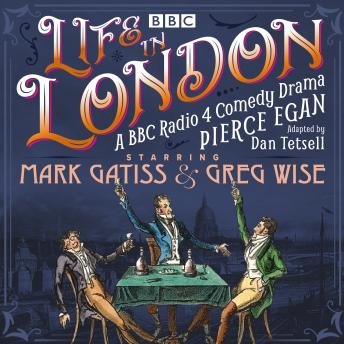 Pierce Egan's renowned 19th-century comic novel adapted by Dan Tetsell is a rollicking real tour of the sprawling post-Regency Metropolis in the years before the Victorians turned up and made everything boring.


We travel through London town all in the company of garrulous author Pierce Egan, cocksure urbanite Corinthian Tom, his naive Somerset cousin Jerry Hawthorn and their drunken compatriot Bob.

Tom and Jerry visit a cockfight, try to buy a horse, meet a sporting legend and lay a wager on which is better, London or the West Country. Meanwhile, garrulous narrator Pierce Egan takes literary critic William Hazlitt to his first boxing match. The lads of Regency London drink with the lower orders in the East End and generally get up to mischief around town.


When Pierce Egan falls on hard times, will his adventures help him make his fortune or will this be the end of the trio's life together?


When first published the popularity of Pierce Egan's book amounted to a craze, as society tried to guess the real life characters featuring in the tales. The celebrity obsession of the Regency period is depicted in this cleverly adapted comedy.

In Training for a Swell

An End to Life in London