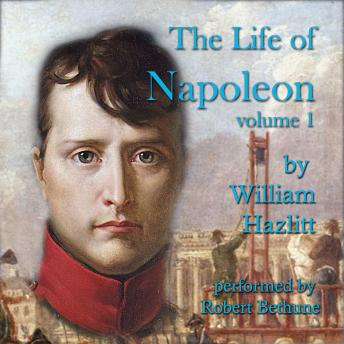 The Life of Napoleon: Volume 1

In this, the first volume of the work, William Hazlitt devotes the vast majority of the work to the vital historical background: Napoleon's family, the history of Corsica, where he grew up, as it affected him and his family, and above all the history of the French Revolution up to the siege of Toulon: the National Assembly, the Constitution, the invasion of France by the First Coalition, the execution of Louis XVI, the Convention, and the Reign of Terror. While this approach has the disadvantage of spending the vast majority of this volume on subjects other than Napoleon himself, it has the great advantage of leaving the reader thoroughly versed in the historical setting that framed Napoleon's life. When he emerges onto the stage of history, at the siege of Toulon, we know exactly what settting he is stepping into.

Hazlitt was a life-long admirer of Napoleon and of the French Revolution, but his admiration was not blind. He shows the full extent of the French Republic's descent into the madness of the Reign of Terror and seeks the cause of it in the natural response of human beings to a toxic mix of fear and temptation, in a setting of political and institutional chaos inside the country, combined with existential threats of invasion and repression from all the major powers of Europe. His analysis is both passionate and clear-sighted. While a firm champion of human rights, human liberty, and human progress, he does not flinch from a clear presentation of the horrors human nature can commit.

The Life of Napoleon was originally published in four volumes in 1828-1830, not long before Hazlitt's death. It was later republished in a limited edition of six volumes by the Grolier Society. This audiobook is based on that edition. A Freshwater Seas production.

This title is due for release on February 19, 2016
We'll send you an email as soon as it is available!