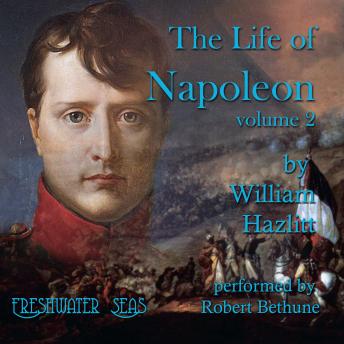 The Life of Napoleon: Volume 2

In this, the second volume of the work, William Hazlitt takes us through the history of Napoleon's campaigns in Italy and Egypt. In the course of these campaigns, and in Napoleon's life in Paris between them, we can see a young, brilliant military leader starting to transform himself from a leader of armies into a leader of nations. His brillian successes on the battlefield bring him to the adoring attention of the French people and the rather alarmed attention of the French government. The Directory finds him to be a very valuable asset and a substantial threat, both at the same time.

Hazlitt was a life-long admirer of Napoleon and of the French Revolution, but his admiration was not blind. His analysis is both passionate and clear-sighted. At this stage in Napoleon's career, he focuses more on the great evens, less on the man and his mind. It is an appropriate focus; at this stage in his life, Napoleon's whole existence was wrapped up in those great events, his personal life was submerged in them.

The Life of Napoleon was originally published in four volumes in 1828-1830, not long before Hazlitt's death. It was later republished in a limited edition of six volumes by the Grolier Society. This audiobook is based on that edition.