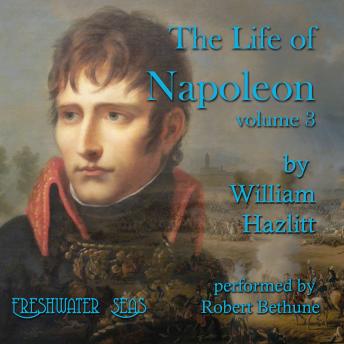 The Life of Napoleon: Volume 3

"William Hazlitt is one of the foremost writers of the English language. His fame as a critic, essayist and social commentator ranks with the likes of Samuel Johnson and George Orwell. He considered his justly famous Life of Napoleon as his most important work.

In this, the third volume of the work, William Hazlitt takes us through the a critical period in Napoleon's life: his leadership of France as First Consul. He shows us how the political developments of the time conincided with Napoleon's personal development, the experiences that convinced him that France needed a new leader and how he came to believe that he himself was that leader. This volume ends with the greatest transition of all: from First Consul to Emperor.

Hazlitt was a life-long admirer of Napoleon and of the French Revolution, but his admiration was not blind. His analysis is both passionate and clear-sighted. At this stage in Napoleon's career, he focuses more on the great evens, less on the man and his mind. It is an appropriate focus; at this stage in his life, Napoleon's whole existence was wrapped up in those great events, his personal life was submerged in them.

The Life of Napoleon was originally published in four volumes in 1828-1830, not long before Hazlitt's death. It was later republished in a limited edition of six volumes by the Grolier Society. This audiobook is based on that edition."

This title is due for release on June 29, 2016
We'll send you an email as soon as it is available!