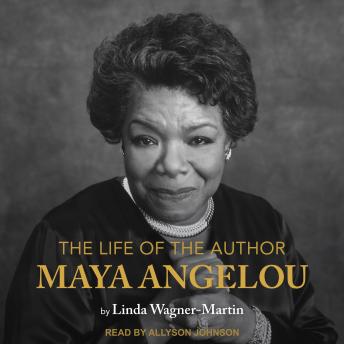 The Life of the Author: Maya Angelou

A comprehensive biographical and critical reading of the works of American poet and memoirist Maya Angelou (1928-2014). Linda Wagner-Martin covers all six of Angelou's autobiographies, as well as her essay and poetry collections, while also exploring Angelou's life as an African American in the United States, her career as stage and film performer, her thoughtful participation in the Civil Rights actions of the 1960s, and her travels abroad in Egypt, Africa, and Europe.

In her discussion of Angelou's methods of writing her stunning autobiography, which began with the 1970 publication of I Know Why the Caged Bird Sings, Wagner-Martin writes about the influences of the Harlem Writers Group (led by James Baldwin, Paule Marshall, and John O. Killens) as well as Angelou's significant friendships with Malcolm X, Martin Luther King, Jr., and other leaders from both international and African American United States cultures. Crucial concepts throughout include the role of oral traditions, of song and dance, of the spiritualism of art based on religious belief, of Angelou's voiced rhythms and her polished use of dialogue to convey more abstract 'meaning." Wagner-Martin shows that, viewing herself as a global citizen, Angelou never lost her spirit of adventure and discovery as well as her ability to overcome.

Life of the Author: Maya Angelou