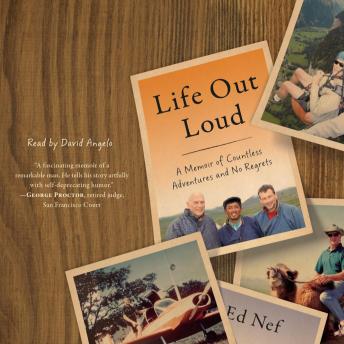 Life Out Loud -- A Memoir of Countless Adventures and No Regrets

Born and raised in New York to a Swiss father and Polish mother, Ed Nef seemed destined for an international life. After serving in Germany with the US Army, Ed began his career with the Foreign Service in Dakar, Senegal, in 1960. Tours in Guatemala and Colombia followed, broken up by assignments to the Peace Corps. While on assignment in Canada, Ed accepted a Congressional Fellowship on Capitol Hill that turned into a job as legislative director for Senator Max Baucus.

Six years later, Ed left government and politics behind, buying a small language school and turning it into the foremost private language-training facility in the DC area. Ed eventually operated language schools in Tokyo, Vietnam, and Mongolia. Inspired by the people he met, Ed began producing documentary films on topics including Vietnam-American relations, Mongolian mining, Senegalese women, and Thai elephant polo, among others.

Today, Ed runs his family foundation to support worthy projects around the world. Its current focus is providing disabled Mongolians with high-quality prosthetics.