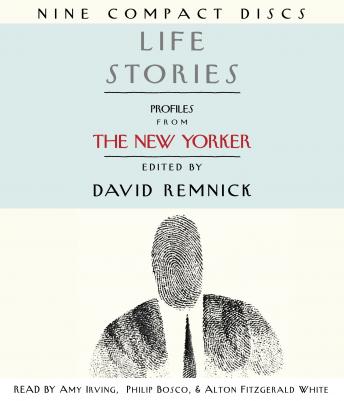 One of art's purest challenges is to translate a human being into words. The New Yorker has met this challenge more successfully and more originally than any other modern American journal. It has indelibly shaped the genre known as the Profile. Starting with light-fantastic evocations of glamorous and idiosyncratic figures of the twenties and thirties, such as Henry Luce and Isadora Duncan, and continuing to the present, with complex pictures of such contemporaries as Mikhail Baryshnikov and Richard Pryor, this collection of New Yorker Profiles presents readers with a portrait gallery of some of the most prominent figures of the twentieth century. These Profiles are literary-journalistic investigations into character and accomplishment, motive and madness, beauty and ugliness, and are unrivalled in their range, their variety of style, and their embrace of humanity.

Including these twenty-eight profiles:

“Mr. Hunter’s Grave” by Joseph Mitchell
“Secrets of the Magus” by Mark Singer
“Isadora” by Janet Flanner
“The Soloist” by Joan Acocella
“Time . . . Fortune . . . Life . . . Luce” by Walcott Gibbs
“Nobody Better, Better Than Nobody” by Ian Frazier
“The Mountains of Pi” by Richard Preston
“Covering the Cops” by Calvin Trillin
“Travels in Georgia” by John McPhee
“The Man Who Walks on Air” by Calvin Tomkins
“A House on Gramercy Park” by Geoffrey Hellman
“How Do You Like It Now, Gentlemen?” by Lillian Ross
“The Education of a Prince” by Alva Johnston
“White Like Me” by Henry Louis Gates, Jr.
“Wunderkind” by A. J. Liebling
“Fifteen Years of The Salto Mortale” by Kenneth Tynan
“The Duke in His Domain” by Truman Capote
“A Pryor Love” by Hilton Als
“Gone for Good” by Roger Angell
“Lady with a Pencil” by Nancy Franklin
“Dealing with Roseanne” by John Lahr
“The Coolhunt” by Malcolm Gladwell
“Man Goes to See a Doctor” by Adam Gopnik
“Show Dog” by Susan Orlean
“Forty-One False Starts” by Janet Malcolm
“The Redemption” by Nicholas Lemann
“Gore Without a Script” by Nicholas Lemann
“Delta Nights” by Bill Buford

This title is due for release on February 29, 2000
We'll send you an email as soon as it is available!