The Lightning Stones: A Novel 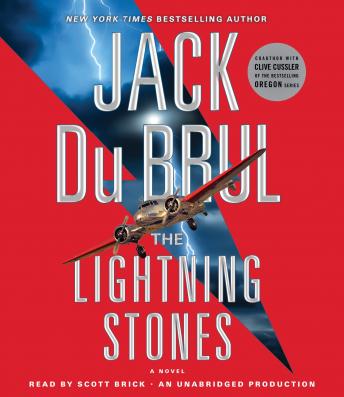 Written By: Jack B. Du Brul

What was Amelia Earhart carrying on her final flight? The adventure begins two thousand feet beneath the surface of the Earth.

Philip Mercer, a preeminent geologist with a taste for international intrigue and danger, rides an elevator two thousand feet into the earth at the Leister Deep Mine in Minnesota. Mercer is there to visit his old friend and mentor, Abraham Jacobs, who is leading a research team to the deepest section of the mine for a groundbreaking study on climate change. But as Mercer approaches, he is stunned to hear automatic gunfire in the massive underground chambers. By the time he finds his way to them, Abe Jacobs and the entire research team have been brutally attacked—and Mercer is left seeking not only answers but revenge.
Mercer immediately retraces Jacobs’s tracks, searching for clues to the secret project on which the distinguished scientist was working. Staying one step ahead of a highly trained team of assassins, Mercer follows a trail that leads from a harrowing close call in the Midwest to a nail-biting showdown in the rugged mountains of Afghanistan to a remote island in the middle of the Pacific. At stake is an extraordinary scientific discovery that could irrevocably alter the planet, centered on a cache of rare crystals called lightning stones—rumored to have been aboard Amelia Earhart’s plane when it vanished on July 2, 1937.
With his trademark combination of intellectual swagger, riveting action, and cutting-edge science, internationally bestselling author Jack Du Brul has crafted a superbly entertaining novel that will thrill his fans.

by Jack B. Du Brul