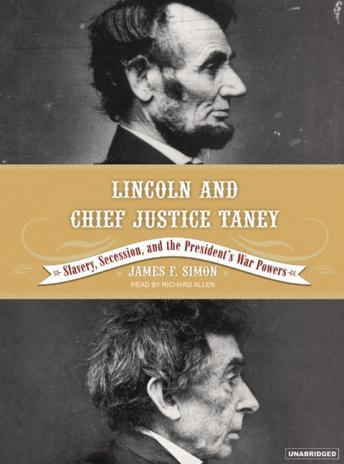 The clashes between President Abraham Lincoln and Chief Justice Roger B. Taney over slavery, secession, and Lincoln's constitutional war powers went to the heart of Lincoln's presidency.

Lincoln and Taney's bitter disagreements began with Taney's Dred Scott opinion in 1857, when the Chief Justice declared that the Constitution did not grant the black man any rights that the white man was bound to honor. Lincoln attacked the opinion as a warped judicial interperatation of the Framers' intent and accused Taney of being a member of a pro-slavery national conspiracy.

In his first inaugural address, Lincoln insisted that the South had no legal right to secede. Taney, who administered the oath of office to Lincoln, believed that the South's seccession was legal and in the best interests of both sections of the country.

Once the war began, Lincoln broadly interpreted his constitutional powers as commander in chief to prosecute the war, suspending habeas corpus, censoring the press, and allowing military courts to try civilians for treason. Taney vociferously disagreed, accusing Lincoln of assuming dictatorial powers in violation of the Constitution. Lincoln ignored Taney's protests, and exercised his presidential authority fearlessly, determined that he would preserve the Union.

James F. Simon skillfully brings to life this compelling story of the momentous tug-of-war between the President and the Chief Justice during the worst crisis in the nation's history.