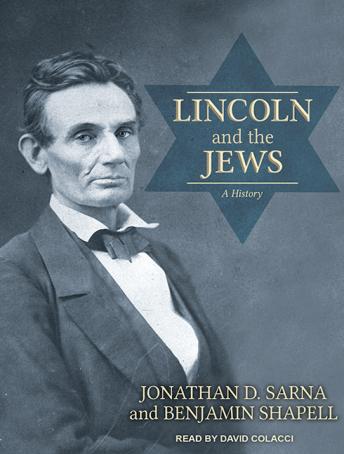 One hundred and fifty years after Abraham Lincoln's death, the full story of his extraordinary relationship with Jews is told here for the first time. Lincoln and the Jews: A History provides listeners both with a captivating narrative of his interactions with Jews and and the opportunity to immerse themselves in rare manuscripts.

Lincoln's lifetime coincided with the emergence of Jews on the national scene in the United States. When he was born, in 1809, scarcely 3,000 Jews lived in the entire country. By the time of his assassination in 1865, large-scale immigration had brought that number up to more than 150,000. Many Americans were alarmed by this development and treated Jews as second-class citizens and religious outsiders. Lincoln exhibited precisely the opposite tendency. He befriended Jews from a young age, promoted Jewish equality, appointed numerous Jews to public office, had Jewish advisers and supporters starting already from the early 1850s, as well as later during his two presidential campaigns. Through his actions and his rhetoric-replacing 'Christian nation,' for example, with 'this nation under God'-he embraced Jews as insiders.

The volume uncovers a new and previously unknown feature of Abraham Lincoln's life, one that broadened him, and, as a result, broadened America.