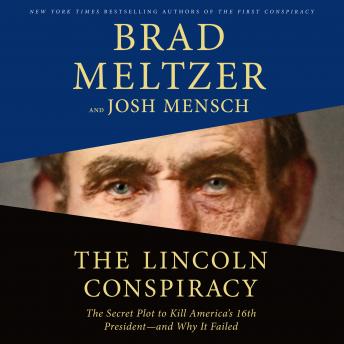 The Lincoln Conspiracy: The Secret Plot to Kill America's 16th President--and Why It Failed

'Everyone knows that Abraham Lincoln was assassinated, but how many know that there was a previous, unsuccessful attempt on his life? Let narrator Scott Brick tell you all about it...Brick can make a nursery rhyme sound exciting, and he's on fire in this audiobook.' -- AudioFile Magazine

The bestselling authors of The First Conspiracy, which covers the secret plot against George Washington, now turn their attention to a little-known, but true story about a failed assassination attempt on President Lincoln

Everyone knows the story of Abraham Lincoln’s assassination in 1865, but few are aware of the original conspiracy to kill him four years earlier in 1861, literally on his way to Washington, D.C., for his first inauguration. The conspirators were part of a pro-Southern secret society that didn’t want an antislavery President in the White House. They planned an elaborate scheme to assassinate the brand new President in Baltimore as Lincoln’s inauguration train passed through en route to the Capitol. The plot was investigated by famed detective Allan Pinkerton, who infiltrated the group with undercover agents, including one of the first female private detectives in America. Had the assassination succeeded, there would have been no Lincoln Presidency, and the course of the Civil War and American history would have forever been altered.

'The Lincoln Conspiracy is, despite its dark subject matter, relentlessly fun to read...It's an expertly crafted book that seems sure to delight readers with an interest in lesser-known episodes of American history.' -- NPR.org

'Filled with amazing American history, secret societies, incredible research, and a shocking conspiracy to murder Abraham Lincoln at the dawn of his presidency. A brilliant combination of edge of your seat history and superb storytelling.'-- James L. Swanson, bestselling author of Manhunt: The 12-Day Chase for Lincoln’s Killer
'Meltzer and Mensch maintain suspense despite the known outcome of the story, and convincingly counter claims that Pinkerton made the whole thing up for publicity purposes. Readers new to the “Baltimore Plot” will appreciate this comprehensive and well-written overview.' -- Publishers Weekly

I knew like most, of course, about Abraham Lincoln and his assassination, but I didn't know about this previous/original plan to assassinate him so this was very enlightening. I enjoyed how well this was written and narrated. It was a lot like a fast-paced suspense/thriller read and I've never enjoyed listening or learning about history quite as much as with this. It was a lot more intriguing and enticing to me listening to this than other history stories that are usually a bit more dry and boring sometimes. I loved hearing about and learning more about the secret society and the undercover detectives, Pinkerton, and his lady detectives. I've heard about Pinkerton before but didn't realize his role in stopping this assassination attempt on Lincoln so it was very illuminating to me to learn about this incident from history. This also makes me a little more curious about Pinkerton and the lady detectives as well as Lincoln because the way they described and talked about them made them more real. They sound much more real with their engaging personalities and senses of humor and everything. It brought more of history to life when listening to this story for me and it was fabulous. If you're interested in Lincoln, knowing more about him, this assassination attempt or anything with this bit of history then take a listen to this because this audiobook, the story, and the narration are amazing. I received an advanced listening copy for free, and I am leaving this review voluntarily.

Brilliant snapshot of history through which to view our present-day struggles.