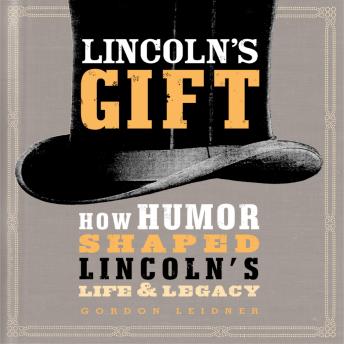 'Simply the best book that has been published on this great president's humor and stories...Everyone interested in Abraham Lincoln will want to read this.' ?William C. Harris, author of Lincoln and the Border States
Abraham Lincoln has long been admired for his leadership, honesty, and eloquence. But despite his somber reputation, the sixteenth president was quite funny. With an uncanny ability to mimic others and an irresistible midwestern twang, Lincoln, in fact, could be downright hilarious.
Brimming with his funniest quips, jokes, and stories, Lincoln's Gift explores the crucial role humor played throughout his tumultuous professional and private life. Perfect for history buffs and Lincoln enthusiasts alike, this clever and captivating biography reveals how America's greatest president used his lighter side to lead the country through one of its darkest times, the Civil War.
'Gordon Leidner ingeniously blends a study of Lincoln's humor with an account of his life, showing how our sixteenth president was not always a 'man of sorrows' but often a man of laughter, capable alike of enjoying as well as telling a good story.'?Michael Burlingame, author of Abraham Lincoln: A Life

This was an excellent book about our Greatest President. Lincoln was a complex Man. and his use of Humor saved him in many a situation. He used it to lighten the mood, change the subject, instill confidence and ease a thought process into the conversation. Lincoln played humor like a trump card. This book gives great instances of it's uses and inflected one with a much more human view of the Great Man. The book was extremely well researched and written.. and the Narrator did a good job with the reading of it. This book was provided free of charge in exchange for a fair review of the book. Thank You!

With time all those who pass become limited to cliff notes. The person they truly were fades away as those they knew firsthand join them in the afterlife. All the textbook information on Lincoln is so dry. When I saw this book I was intrigued. After all, if time travel was possible, Lincoln was on my list. Could this book shine light on who he really was? It turns out the answer is a big yes! I loved how I felt like I was a spectator watching him grow and develop into the legend he is today. All his personality was unexpected and wonderful. The narrator did an incredible job with so many voices. It was fantastic. I am now letting my dad listen to it. He likes it too. While I was given a copy of this book, my review is impartial and honest. I strongly recommend this book.

This book is awesome! It was better than I expected. It even says in the book that it's not meant to be a joke book, but a biography of Lincoln with bits of humorous stories woven in. I loved all the details of Lincoln's life and laughed at the humor. It also mentions how part of what made Lincoln so funny was his mannerisms and delivery of his jokes that were often funnier than the joke itself. I felt like the Narrator nailed this also. I highly recommend this book! Can't wait to listen to it again with family on our road trip. This audiobook was given to me for free at my request and I provided this voluntary review.

it's a clever book, well written, and well researched. I really enjoyed the narrator switching back and forth from Lincoln to narrator and back.

More books have been written about Abraham Lincoln than any other President. Sadly, precious few have told his life story through his humor. "Lincoln's Gift" is now the standard for Lincoln's wit and wisdom.

i received this audio for free in exchange for an honest review. Albeit the book was not as funny as perhaps the title promises it was profoundly educational and an enjoyable history lesson about one whom many consider to be our greatest president. As we listen to his anecdotes and morality one wishes the party of lincoln might adopt more of his sensibilities. the narration is extremely well done with an enjoyable 3rd part naration and a beleivable voice of lincoln interspearsed through out.

Wonderful, insightful and humorous! Short review: This is the most enjoyable biography I have consumed in some time! I highly recommend it for anyone looking for deeper insight into America's greatest President or a good historical laugh. Longer review: Pros: A great many books have been written about Abraham Lincoln over the years, and most students in the United States of America learn few basic facts about him other than the dates of his Presidency, role as President during the U.S. Civil War, the Gettysburg Address, that he suffered from depression and the end of his life by assassination. As a history and self-development junkie, I regularly consume biographies of famous leaders, so went in knowing a decent additional bit about his life. Never had I heard or read anything about Lincoln's humor. This audiobook has immensely deepened my understanding of "Honest Abe" and how he tackled his life's challenges, ranging from family disputes to courtroom battles and political wrangling. On top of being well written and making sure that quotes by or about Lincoln by his contemporaries are used in context, the additional use of local accents by the narrator for the individuals quoted added a rich depth to the material. Cons: The only negative I had about this audiobook was that there were a few times when the volume level of the narrator's voice changed without warning. This sounded like a failure in editing to properly equalize volume from separate recording sessions. The changes were not large enough to have to really crank the volume up or down but did make for slight adjustments to device volume to keep it at a comfortable listening level. Note: This review is for the audio version of the book. I was given this free review copy audiobook at my request and have voluntarily left this review.