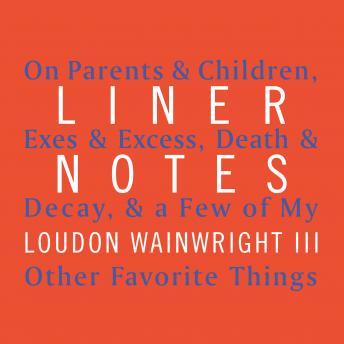 Liner Notes: On Parents & Children, Exes & Excess, Death & Decay, & a Few of My Other Favorite Things

A memoir by the influential Grammy Award-winning singer and actor-son of journalist Loudon Wainwright, former husband of Kate McGarrigle and Suzzy Roche, and father of Rufus Wainwright, Martha Wainwright, Lucy Wainwright Roche, and Lexie Kelly Wainwright-a captivating meditation on relationships and creativity from the patriarch of one of America's great musical families.

With a career spanning more than four decades, Loudon Wainwright III has established himself as one of the most enduring singer-songwriters who emerged from the late sixties. Not only does he perform regularly across America and in Europe, but he is a sought after actor, having appeared in such movies as The 40-Year-Old Virgin, Knocked Up, and Sleepwalk with Me; and TV series ranging from M*A*S*H to Person of Interest to Parks and Recreation.

There is probably no singer-songwriter who has so blatantly inserted himself into his songs, about parents, grandparents, children, siblings, and wives. As he puts it in 'So Many Songs': It's taken so long to finally see / My songs about you are all about me. The songs can be laugh-out-loud funny, but they also can cut to the bone. In his memoir, Wainwright continues to emphasize the personal: he details the family history his lyrics have referenced and the fractured relationships in the Wainwright family throughout generations: the alcoholism, the infidelities, the competitiveness-as well as the closeness, the successes, and the joy. Wainwright reflects on the experiences that have influenced his songwriting, including boarding school, the music business, swimming, macrobiotics, sex, incarceration, and something he calls Sir Walter Raleigh Syndrome.

The book is very much about being a son-a status that dominates many of Wainwright's songs. But it is also about being a parent, a brother, and a grandfather. Wainwright's song lyrics are represented throughout the book, amplifying his prose and showing the connections between the songs and real life. He also includes excerpts and selections from his father's brilliant LIFE magazine columns-and, in so doing, re-establishes his father as a major essayist of his era. A funny and insightful meditation on family, inspiration, and art, Wainwright's memoir will thrill fans, listeners, and anyone who appreciates the intersection of music and life.

Liner Notes: On Parents & Children, Exes & Excess, Death & Decay, & a Few of My Other Favorite Things