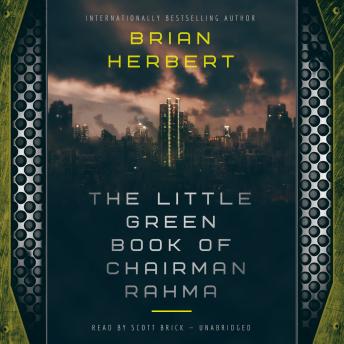 A novel about saving the environment throughtotalitarian repression-by Frank Herbert's son Brian.
A revolution has taken over the government of theUnited States, and the environment has been saved. All pollution has beenbanned and reversed. It's a bright, green new world. But this new world comes ata great cost. The United States is ruled by a fascist green police state, and thecorporations are fighting back. Joining them is an increasing number of rebelsangered by the dictatorship of Chairman Rahma. The chairman's power is absoluteand appears strong, but cracks are beginning to show as new weapons aredeveloped by the old corporate powers, foreign alliances begin to make inroadsinto America's influence ... and strange reports of mutants filter through thegovernment's censorship.
The Little Green Book of Chairman Rahma isboth thrilling and thought-provoking, revealing that human greed can poisoneven the most righteous intentions.