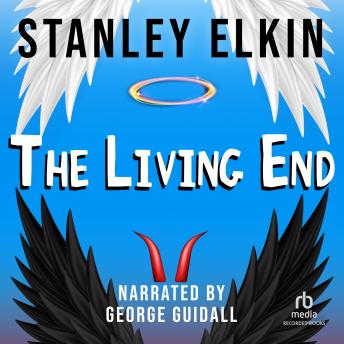 Stanley Elkin's The Living End is a marvelously funny novel about life and death, heaven and hell. In it, the National Book Award-winning author sets into motion a divine comedy that will have you chuckling at his wry visions of celestial affairs. Ellerbee, the unassuming owner of a small liquor store, is fatally shot in a holdup. First, the Angel of Death ushers him into a wondrous heaven, but St. Peter has other, more infernal plans for this hero. After his transfer, Ellerbee discovers that hell is a busy place. Even God pays an occasional visit there. But the pep talks God delivers to its tormented residents aren't anything like what he gave to Job. Veteran narrator George Guidall provides the perfect voices for the baffled Ellerbee, dutiful angels, and tattered souls who gather before God. He'll make you feel right at home in this spirited world of sight gags, one liners, and cosmic pranks.