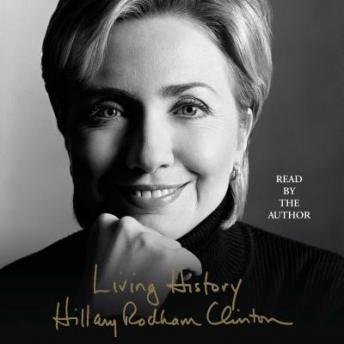 Author of the Instant #1 New York Times Bestseller What Happened

Hillary Rodham Clinton is known to hundreds of millions of people around the world. Yet few beyond her close friends and family have ever heard her account of her extraordinary journey. She writes with candor, humor and passion about her upbringing in suburban, middle-class America in the 1950s and her transformation from Goldwater Girl to student activist to controversial First Lady.

Living History is her revealing memoir of life through the White House years. It is also her chronicle of living history with Bill Clinton, a thirty-year adventure in love and politics that survives personal betrayal, relentless partisan investigations and constant public scrutiny.

Hillary Rodham Clinton came of age during a time of tumultuous social and political change in America. Like many women of her generation, she grew up with choices and opportunities unknown to her mother or grandmother. She charted her own course through unexplored terrain -- responding to the changing times and her own internal compass -- and became an emblem for some and a lightning rod for others. Wife, mother, lawyer, advocate and international icon, she has lived through America's great political wars, from Watergate to Whitewater.

The only First Lady to play a major role in shaping domestic legislation, Hillary Rodham Clinton traveled tirelessly around the country to champion health care, expand economic and educational opportunity and promote the needs of children and families, and she crisscrossed the globe on behalf of women's rights, human rights and democracy. She redefined the position of First Lady and helped save the presidency from an unconstitutional, politically motivated impeachment. Intimate, powerful and inspiring, Living History captures the essence of one of the most remarkable women of our time and the challenging process by which she came to define herself and find her own voice -- as a woman and as a formidable figure in American politics.

Loved it! There were so many things that I learned about her life and her beliefs! Hillary for President!!

I am glad I got to know Hilary Clinton better. She is an intelligent woman who was able to accomplish so much. The book covered her husband's public infidelity and their marriage's recovery. I now understand her relationship to the state of NY. I think that she is content no matter where she finds herself.

I loved it. Hillary does a great job describing every event. Great read if you into politics and wanna know what she has accomplished.

Not worth reading. I love Hillary, but this was awful.

Hillary is such a dynamic woman, I expected more from her book. I enjoyed seeing the white house from her perspective but it isn't a biography. Not what I expected.

This is not the book. This is a speech by Hilary, commenting on the book. The speech itself is good, and she does give a few excerpts from the book, however, I was disappointed that this was not the actual book.

I expected the book and was not interested in the lecture. I still want to hear the book.

I wish I read the other reviews. I was interested in the listening to the book, not a hearing Hillary talk about the book. The title of this selection should really be changed.

I was surprised to find this book was only 1 CD long. I thought it was her autobiography so I was disappointed that it was merely a speech.

I also enjoyed listening to the speech, but was really disappointed because I thought it was going to be a reading of the entire book. Description is missleading.

I enjoyed listening to the speech, but was really disappointed because I thought it was going to be a reading of the entire book.

Although I don't support abridged versions, this one provided a more than adequate representation of the former First Lady's experiences leading up to and during her years in the White House. I would have liked to have heard more about her decision to run for Senate, but she provided an amazing overview of the Clinton presidency with a balanced presentation of both the good and bad. The 90's were an amazing decade and the Clinton's helped to shape the economic recovery and fostered renewed optimism. The book provides a nice reminder of the events of that decade which had us living the good life in the shadow of forboding about what was to come in 2001.

I thought this would be a reading of part or all of her book. That is not what it is. It's a 37 minute speech she gave at a college that includes bits and pieces from her book.

Mrs. Clinton presents an interesting perspective on events. About what would be expected from the left side of the aisle.

I enjoyed this book because I closely followed the Clinton White House and legislature for eight years. They tried to get regular people interested and involved in old-fashioned politics. Does anyone remember politics before lobbyists and giant corporations and the accompanying corruption? While the Clintons were not perfect, they were both busy, hard-working, and extremely intelligent. So even if you didn't agree with every policy (which I did not), they were masterful politicians. I think some of the ideas are still valid (and in need of attention today).

Here is a story of a woman who claims to be a feminist and then breaks all the rules of feminism. You gotta love a poser like that. If you need a story that is full of crap, I highly recommend this. She doesn't mention anything that we are interested in, like why she cut her pride off like a wounded arm and stayed with her unfaithful husband, and goes over multiple things that she has "accomplished" it reads (listens) like a resumè, not an autobiography.

Very engaging, only wish that an unabridged version was available.

Delightful, heartbreaking, and poignant -- a revealing and straightforward memoir that captures the 3-D Ms. Clinton. I was suprised at the simplicity but apparent authenticity she identified as motivators for her political being. And I will always fondly recall the recounting of her relationship with her father - a common man's experience -- and the pitfalls of a public life, moose lip soup and all.

While I was a big Bill fan, I knew very little about Hillary. I found this book enlightening, and liked what she had to say. I think there is another book she could write - one documenting what she and her daughter did and saw during their travels during that period. I found those anecdotes fascinating! Though I am always suspicious of the honestly in any auto-biography, I thoroughly enjoyed this book, as much as I did Bills. Hillary for President? Who knows... Time will tell.

Great listen. I really enjoy books when the author reads them. I listened to Bill Clinton's "My Life" then this book right after it. I was surprise that that they didn't cover a lot of the same material. In fact I think this was the best part of the book. Of course there were similarities between this and Bill's book, because hey those things happened to her as well. But outside of those things, Hilary shares her insights and views on many subjects, not just political. Audio was clear and she has a pleasant voice.

I really enjoyed hearing history as told by the one who lived it. She held my interest and amazed me with her knowledge of politics and national affairs.

OK, yes I'm a liberal democrat, but felt somewhat ambivalent about the Clinton adminstration until I read this book. This was such an interesting perspective into the factors that shaped the stories in the news. For example, with Starr and the Whitewater investigation, I remember seeing stories periodically about this person or that, but it never occurred to me that the Clintons were under attack for 4 full years. She deals with Bill Clinton's affair head on and does not skirt the issue, but also maintains her privacy in terms of her reasons for staying with him. Her only real shortcoming in this book is the fact that she does not give herself enough credit for the brains and work ethic she so obviously has. She tells you about amazing accomplishments in her own career pre-Presidency so matter-of-factly: come on, Hillary, toot your own horn a little bit!

I enjoyed every moment of this autobiography, and gained a much deeper insight into Hillary's drive, and the political life of this country for the eight years during the Clinton administration. Also, her excellent speaking voice made for a pleasant listening experience.

I wasn't a big Bill fan, but I have always admired Hillary, even moreso now. I'd have voted for her had she run this year!! You go Girl!!

Whether you love her or hate her, her book will help you to better understand a woman who is and will continue to be one of the prominent public figures of our age.

I read Bill's first. It made a good complement, but wasn't as good. Her voice isn't as great as Bill's. She's definitely not finished yet. I'm looking forward to more sequels. Go Hillary!

Thankfully, it's abridged. I suppose history will thank the Clintons for writing memiors, so that someday someone with real writing skills can read through them and provide a truly entertaining and readable account of this celebrated First Marriage. If you are not that historian looking for raw historical material, stay away from this book. It is transparently self serving and poorly written. Even at that, Hillary's reading skills did not do the text justice.

This is one of those 3.5 star titles. It's interesting enough to listen to, but doesn't really provide any juicy insights into the Clinton years. All in all a good read, and having it read by Ms. Rodham Clinton herself makes it all the more so.

This title is due for release on June 9, 2003
We'll send you an email as soon as it is available!