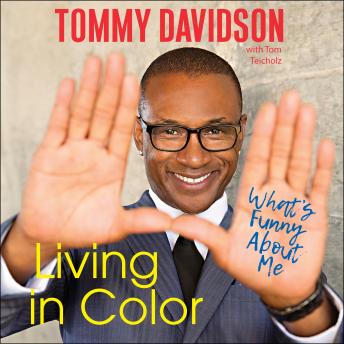 Living in Color: What's Funny About Me

Abandoned as an infant on the streets of Greenville, Mississippi, and rescued by a loving white family, Tommy Davidson spent most of his childhood unaware that he was different from his brother and sister. All that changed as he came of age in a society of racial barriers-ones that he was soon to help break. On a fledgling network, Tommy joined the cast of In Living Color, alongside other relative newcomers including Jim Carrey, Rosie Perez, Jamie Foxx, and Jennifer Lopez-all united by an ingenious throng of Wayans siblings, poised to break new ground.

Tommy gives listeners the never-before-told behind-the-scenes story of the first show born of the Hip Hop Nation: from its incredible rise, to his own creation of such unforgettable characters as Sweet Tooth Jones and appearing in such classic sketches as 'Homie The Clown' and the unforgettable 'Ugly Woman,' through guest-star skirmishes to backstage tensions and the eventual fall of this pop-culture touchstone. And he also shares his very personal story of living with-and being inspired and empowered by-two distinct family histories.

Told with humor and hard-won honesty by a singular voice whose family and friendships help him navigate a life of personal and professional highs and lows, Living in Color is a bracing, illuminating, and remarkable success story.

Living in Color: What's Funny About Me

This title is due for release on February 28, 2020
We'll send you an email as soon as it is available!