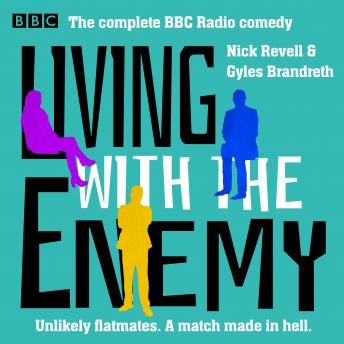 Living with the Enemy: The Complete BBC Radio comedy

Nick Reynolds is a lefty alternative comedian-turned-holistic therapist. Living on the floor below him is Gyles Brandon, an ex-Tory MP turned media darling. Poles apart, they'd never choose each other as friends, but when Nick accidentally floods Gyles' apartment, they become reluctant flat-sharers.

Joined by Gyles' goddaughter Sophie Okuyu, the spoilt daughter of a corrupt African politician, the housemates get into various scrapes, including plotting to seek revenge on Gyles' ex-wife, trying to curry favour (and make some money) at a swanky Mayfair art gallery, and going on a celebratory night out which swiftly turns to disaster...

Written by and starring Gyles Brandreth as Gyles and Nick Revell as Nick, this Odd Couple story was inspired by a chance meeting between the pair at the Edinburgh Festival, where they hit it off despite being political opposites. Gugu Mbatha-Raw (Belle, Black Mirror) plays Sophie, and guest stars include Prunella Scales, Timothy West, Martin Jarvis and Neil Pearson.

Living with the Enemy: The Complete BBC Radio comedy