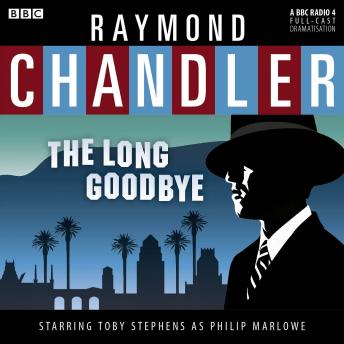 Fast-talking, trouble-seeking private eye Philip Marlowe is a different kind of detective: a moral man in an amoral world. California in the ’40s and ’50s is as beautiful as a ripe fruit and rotten to the core, and Marlowe must struggle to retain his integrity amidst the corruption he encounters daily. In The Long Goodbye, Marlowe forms an uneasy friendship with a drunk named Terry Lennox. So when Lennox shows up late one night, looking guilty and asking for a ride to Tijuana airport, Marlowe agrees - though he suspects he’s going to regret it. He’s right. First Lennox’s rich, adulterous wife is found murdered, then Marlowe is arrested, then Lennox himself turns up dead in Mexico: an apparent suicide with a signed confession by his side. And if that wasn’t enough, Marlowe also finds himself babysitting an author to make sure he delivers his next book. Trying to juggle two increasingly tricky cases, Marlowe knows that if he takes his eye off the ball, he could end up dead... Starring Toby Stephens, this powerful dramatisation by Stephen Wyatt cannot fail to draw you into Raymond Chandler’s darkly attractive world of deceit, decadence and death.