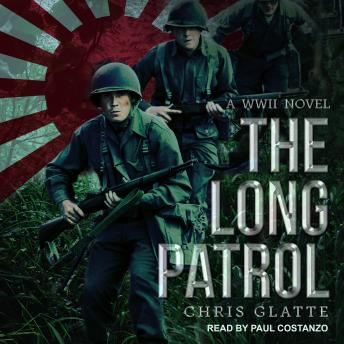 The Long Patrol: A WWII Novel

During the bloody battle for Guadalcanal, one Army unit's mission to infiltrate enemy lines to arm and train a guerrilla force of natives goes horribly wrong.

The 164th Army Division has come to reinforce the beleaguered 1st Marine Division, which has been fighting the Japanese for months. It will be the Division's first combat test as well as its bloodiest.

The fighting has come to a standstill with neither side giving ground. The 164th is desperate to break the stalemate and the mounting casualties.

Their possible solution comes in the form of a British Coast Watcher. Thomas Welch offers to take a small unit into the jungle to meet up with a force of natives to instigate a guerrilla war against the Japanese rear.

A unit from Able Company is selected for the job. Each man's been battle tested, defending Henderson field from hordes of attacking Japanese. The mission goes badly from the outset and the unit is cutoff and desperate to continue their mission.

As the battle for Guadalcanal rages on, their mission changes. As more men fall, the likelihood of completing it is slipping away. Betrayed, alone and hurt, they find themselves as the only soldiers able to deliver victory from the jaws of defeat.