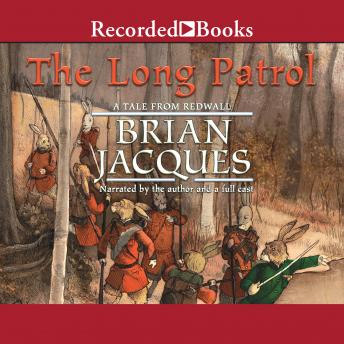 Brian Jacques' stories of Redwall have sparked the imaginations of innumerable readers and won the New York Times best-selling author countless fans. In The Long Patrol, Jacques delivers a wonderfully crafted tale set in his fantastical realm. The vicious Rapscallion army is threatening to batter down the walls of Redwall Abbey. But standing in their way are the brave hares of the Long Patrol and a stout-hearted contingent of forest creatures. And no defender of Redwall is more courageous than young Tammo, an inexperienced but eager hare who dreams of great adventure. Fueled by sumptuous feasting and hearts lifted by stirring ballads, Tammo and his honorable companions raise their swords in a pitched battle for the future of their land. The Long Patrol is a rich addition to a series already overflowing with action and warm humor. All of Jacques' memorable characters are skillfully portrayed by the rousing narration of the author and a full cast. 'A welcome episode for the series' legion of fans.'-Booklist