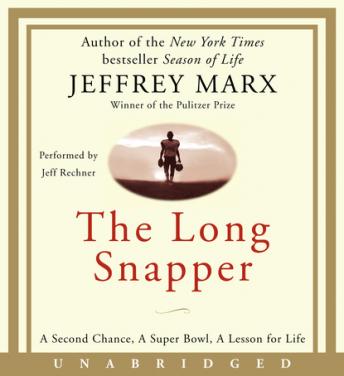 Brian Kinchen was a thirty-eight-year-old husband, father of four, and seventh-grade Bible teacher whose professional football career had been over for three years when the New England Patriots called on December 15, 2003. With the Patriots riding a ten-game winning streak and the playoffs only a few weeks away, they needed a fill-in for the obscure but vital job of snapping the ball for their punter and kicker—a long snapper. Brian had received similar invitations to tryouts that yielded only disappointment—the teams always went with a younger guy. But could he really turn away from the chance of a lifetime?

The Long Snapper chronicles Brian's remarkable journey as he and the Patriots seek the ultimate trophy. Unfortunately, the dream come true turns into a personal nightmare as Brian struggles both on and off the field, and the pressure to perform on the biggest stage in professional sports nearly causes him to walk away. Seven weeks after leaving the classroom, however, Brian overcomes his greatest fear and snaps the ball on the historic game-winning field goal with only seconds left in the Super Bowl.

As told by Pulitzer Prize-winning journalist Jeffrey Marx, The Long Snapper is the story of a man who finally achieves the success he has always wanted. Brian Kinchen's championship ring is a powerful status symbol for all to see. But his journey forces him to reexamine what really matters, and he realizes the true measure of a man has nothing to do with status: life is not about prestige; it is about passion and purpose. It is about impacting the lives of others.