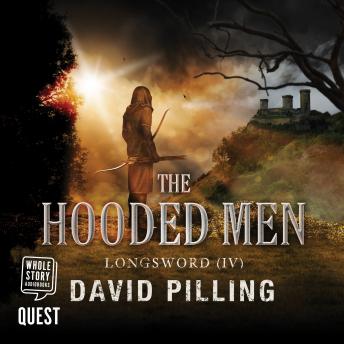 Longsword IV: The Hooded Men is the latest historical adventure novel by David Pilling, author of Reiver, Soldier of Fortune, The Half-Hanged Man, Caesar's Sword and many more novels and short stories.

Henry III is dead. The new king, Edward I, is thousands of miles away in the Holy Land. In his absence, old enemies plan to shatter the fragile peace and plunge England into another civil war. Robert Ferrers, the outlawed Earl of Derby and Edward's bitter enemy, raises the standard of revolt. He gathers an outlaw army secretly dreams of seizing the crown itself. Hugh Longsword arrives home in disgrace after his failure to protect Edward. He is given one chance to redeem himself and sent to investigate disturbances in northern England. The scale of the conspiracy soon becomes apparent as Hugh encounters enemies old and new: Sir John d'Eyvill, the outlaws of Sherwood, and a mysterious knight who calls himself the King of the North Wind.