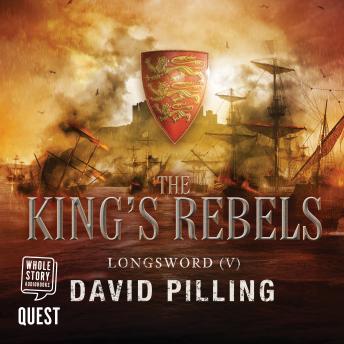 Longsword V: The King's Rebels is the latest historical adventure audiobook by David Pilling, author of Reiver, Soldier of Fortune, Caesar's Sword and many more novels and short stories.

Prince Llywelyn of Wales refuses to swear loyalty to the king, Edward I. To defy the might of the English crown, Llywelyn will need allies. He looks to the west, to Ireland, where the ambitious Clan MacMurrough have set up their chieftain as High King. Together, the Welsh and Irish leaders plan to drive Edward's forces from their land. Sir Hugh Longsword is summoned to deal with the crisis. With enemies at home thirsting for his blood, he is only too grateful to be sent to Ireland. There he encounters the galloglass, ferocious Gaelic warriors who will fight to the last man on the battlefield. Hugh has survived civil war in England but will need all his skill and experience to survive the hell of Irish warfare.