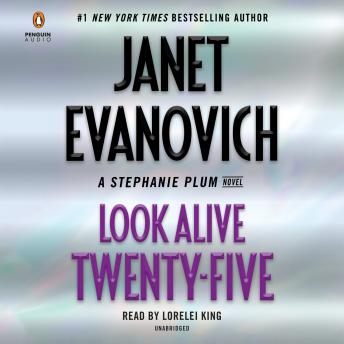 Stephanie Plum faces the toughest puzzle of her career in the twenty-fifth entry in Janet Evanovich's #1 New York Times-bestselling series.

There's nothing like a good deli, and the Red River Deli in Trenton is one of the best. World-famous for its pastrami, cole slaw, and for its disappearing managers. Over the last month, three have vanished from the face of the earth, and the only clue in each case is one shoe that's been left behind. The police are baffled. Lula is convinced that it's a case of alien abduction. Whatever it is, they'd better figure out what's going on before they lose their new manager, Ms. Stephanie Plum.

Very humorous! Just what I needed!

I loved this story line, for some reason I started out not liking the narrators voice for Stephanie but she does great on so many of the others that she has grown on me over time and through some books. One of my faves though in the series and they always are great.

Love this book. Author never lets me down.

Needed something fun and uplifting these days. Fit the bill!! Laughed out loud and immediately got another Evanovich book.

I liked this one enjoyed listening, same old Stephanie Plum.