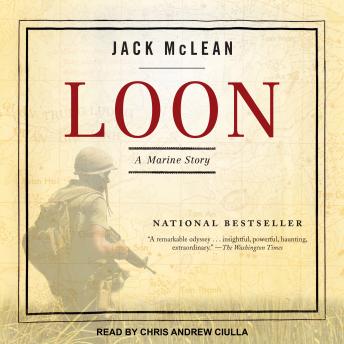 'Kids like me didn't go to Vietnam,' writes Jack McLean in his must-listen memoir. Raised in suburban New Jersey, he attended the Phillips Academy in Andover, MA, but decided to put college on hold. After graduation in the spring of 1966, faced with the mandatory military draft, he enlisted in the United States Marine Corps for a two-year stint. 'Vietnam at the time was a country, and not yet a war,' he writes. It didn't remain that way for long.

A year later, after boot camp at Parris Island, South Carolina, and stateside duty in Barstow, California, the Vietnam War was reaching its peak. McLean, like most available Marines, was retrained at Camp Pendleton, California, and sent to Vietnam as a grunt to serve in an infantry company in the northernmost reaches of South Vietnam. McLean's story climaxes with the horrific three-day Battle for Landing Zone Loon in June, 1968. Fought on a remote hill in the northwestern corner of South Vietnam, McLean bore witness to the horror of war and was forever changed. He returned home six weeks later to a country largely ambivalent to his service.

Written with honesty and insight, Loon is a powerful coming-of-age portrait of a boy who bears witness to some of the most tumultuous events in our history, both in Vietnam and back home.