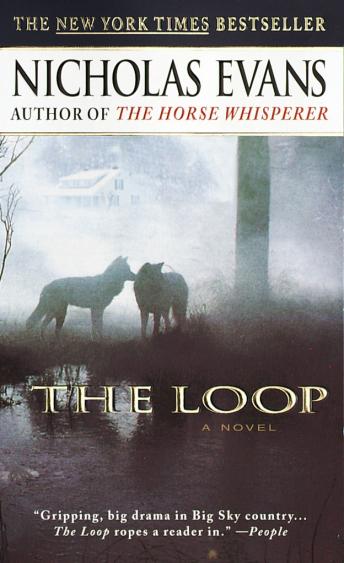 A pack of wolves makes a sudden savage return to the Rocky Mountain ranching town of Hope, Montana, where a century earlier they were slaughtered by the thousands. Now shielded by law as an endangered species, they reawaken an ancient hatred that will tear a family, and ultimately the town, apart.

At the center of the storm is Helen Ross, a twenty-nine-year-old wolf biologist sent alone into this remote and hostile place to protect the wolves from those who seek to destroy them. The Loop charts her struggle, and her dangerous love affair with the son of her most powerful opponent, the brutal and charismatic rancher Buck Calder.

A haunting exploration of man's conflict with nature and the wild within himself, an epic story of deadly passions and redemptive love set against the grandeur of the American West, The Loop is destined to capture the hearts and imaginations of readers everywhere.

I read this book myself years ago and loved it, but I'd forgotten since then exactly how the plot worked itself out. Nicholas Evans' books can't be beat for drawing you in and holding you captive until the very end. I'd match "The Loop" against "The Smokejumper" (my favorite of Evans' books) for excitement and falling in love with the characters---especially the wolves.

This book was alright I think if it was the unabridged version it would have been easier to follow and more entertaining.

Tragic, true-to-life story. Easy to understand, hard to face. I want to give it a 4 because it really stirred my passion for animals. But, because Buddism is the religion of choice for some of the main characters, it was far more tragic than the author even intended it to be, to me. Then, at the end, a lot has been lost, and there is very little hope for marriage and family for persons involved.