Lopsided: How Having Breast Cancer Can Be Really Distracting 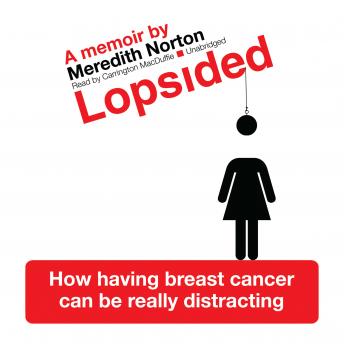 "Lopsided is not your ordinary cancer memoir. Neither too serious nor too saccharine, Meredith Norton displays the razor-sharp wit of a masterful humorist as she chronicles every step of her experience, from the first appearance of her bizarre symptoms while she was living in Paris to having to moving back home to California to live with her compulsive parents and their five television sets. Alongside the hilarious and harrowing portrait of her treatments, Norton offers equally amusing memories of her offbeat life, ranting about the innumerable copies of Lance Armstrong's cancer survival book offered by well-meaning family and friends and railing against self-pity and victimhood. Irreverent, down-to-earth, and incredibly funny, Norton's memoir brings a refreshing burst of attitude to a difficult experience she refuses to be intimidated by."

"Blackly humorous....Norton is one plucky dame, and she displays a sharp eye for the human condition. Her challenging, awkward encounters-with doctors, nurses, even with well-meaning but clueless sympathizers-all have the ring of truth....Norton calls herself a storyteller, and the tale she has crafted from a life-altering event is indeed hard to put down."-Kirkus Reviews

Lopsided: How Having Breast Cancer Can Be Really Distracting

This title is due for release on May 21, 2008
We'll send you an email as soon as it is available!