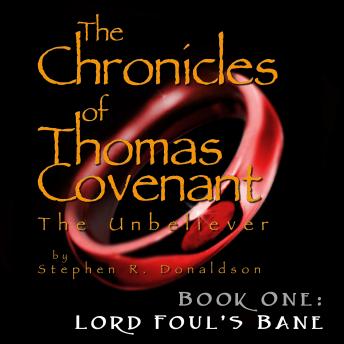 #1 of The Chronicles of Thomas Covenant the Unbeliever

Thomas Covenant is a leper, a bitter and solitary pariah who is mystically transported to another Earth where time moves differently than ours, one in which magic takes many forms. The Land is threatened by many evils, the most immediate of which is a maddened Cavewight whose subterranean excavations have unearthed the ancient and puissant Staff of Law.

More dangerous to the free people of the Land is the Gray Slayer, Lord Foul, the Despiser, who intends to destroy the actual foundations of the Earth that he might wage war against the universe’s Creator. And Foul’s intended weapon in this conflict? None other than Thomas Covenant himself.

I really enjoy listening to books by Stephen r Donaldson an Terry Brooks. What a great set of books.

The book is good and the narrator has a nice voice. He reads every line like it’s the last line of the book. It get old after a while.