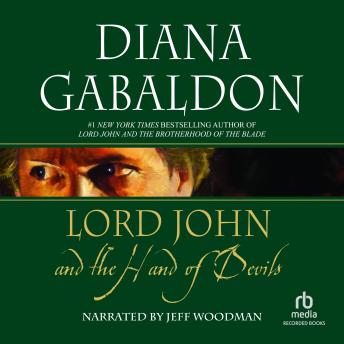 Lord John and the Hand of Devils

Diana Gabaldon, #1 New York Times bestselling author of the celebrated Outlander series, delivers three mesmerizing tales of war, intrigue, and espionage that feature one of her most popular characters: Lord John Grey. In Lord John and the Hellfire Club, Lord John glimpses a stranger in the doorway of a gentleman's club-and is stirred by a desperate entreaty to meet with him in private. It is an impulse that will lead Lord John into a maze of political treachery and a dangerous, debauched underground society. In Lord John and the Succubus, English soldiers fighting in Prussia are rattled by a lethal creature that appears at night. Called to investigate, Lord John soon realizes that among the spirits that haunt men, none frighten more than the specters conjured by the heart. In Lord John and the Haunted Soldier, Lord John is thrust into the baffling case of an exploding battlefield cannon that ultimately forces him to confront his own ghosts-and the shattering prospect that a traitor is among the ranks of His Majesty's armed forces.

Desperate for anything Outlander, I just finished reading all of the books in the The Lord John Series. I thoroughly enjoyed them all.

I love these stories about Lord John. The mystery kept me on the edge of my seat waiting for the answer. Also, the comic relief in the stories eases some the tension in the plots. Also, the slight references to Jamie and Claire bring back memories from the Outlander series. I have two books left for Lord John and will have to look for something just as entertaining until the next Outlander/Lord John book is released.