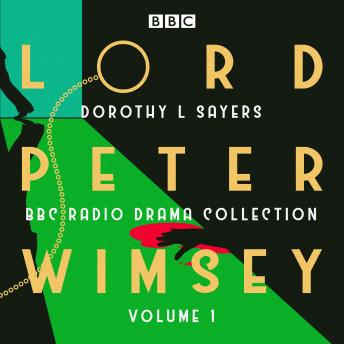 Aristocratic amateur sleuth Lord Peter Wimsey was the master creation of Dorothy L Sayers, widely acknowledged as one of the four original ‘Queens of Crime’. These full-cast adaptations – first broadcast on BBC radio in the 1970s, and presented here in their entirety – are admired by fans of the genre worldwide.

Whose Body? is the tale that first introduced Lord Peter to the world, and sees him investigating the case of a corpse in a Battersea bathtub and a vanished oil millionaire.

In Clouds of Witness, Lord Peter’s eldest brother stands accused of murder. In collaboration with Inspector Parker, Wimsey slowly uncovers a web of lies and deceit within his own family...

Unnatural Death finds Peter probing the mysterious death of an elderly lady. He suspects foul play, and with the help of the indomitable Miss Climpson, sets about his investigations in deepest Hampshire...