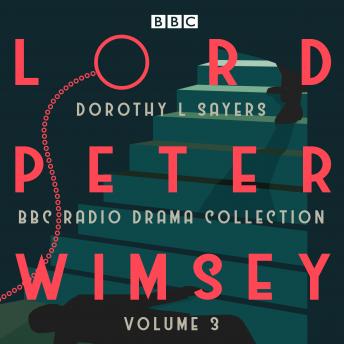 Gentleman detective Lord Peter Wimsey starred in a number of novels and short stories by Dorothy L Sayers. These full-cast adaptations – first broadcast on BBC radio between 1979 and 2010 – are cherished by crime aficionados worldwide.

Murder Must Advertise sees Lord Peter going undercover in an advertising agency to investigate the death of a copywriter.

The Nine Tailors finds the aristocratic detective stranded in a remote village, where he is drawn into a case of stolen jewels and an unidentified body.

Gaudy Night takes place at Harriet Vane’s old Oxford college, where a series of spiteful pranks and poison-pen letters have torn apart the academic community. With Lord Peter’s help, can she uncover the perpetrator?

In Busman’s Honeymoon, newlyweds Harriet and Peter have their marital bliss disturbed by a body in the basement – and are once again embroiled in a murder investigation.