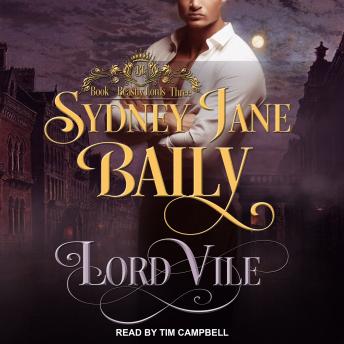 Lord Michael Alder has always behaved himself, enjoyed the London social Season, and even became engaged in his quiet, unassuming way. Then treachery shatters his gentlemanly character. So be it . . . if the bon ton thinks him a rogue, he may as well shed the burdensome, boring veneer of decency and decorum.

Worshiping him from afar, Ada Kathryn is thrilled to encounter the dash-fire viscount in the darkened garden. Minutes later, her innocence in tatters, she waits for the noble Lord Alder to do the honorable thing. Instead, she watches as the most vile lord in London saunters away.

Drinking and carousing with the lowliest wenches to the highest aristocrats, Alder greets each day with a throbbing head, a sour stomach, and an even sourer disposition. Until a desirable new lady arrives in London, a polished stranger, not a hint of vengeance. If Lord Vile thought he understood betrayal and heartache, he hasn't seen anything yet . . .