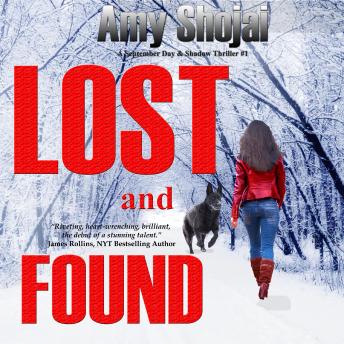 She doesn't trust people. But can she team up with a service puppy to catch a murderer?
An explosive first-in-series. 12+ hours of fast-paced action brimming with amateur sleuthing and loyal dogs.
"Riveting, heart-wrenching, and brilliant..." -James Rollins, New York Times bestseller of Bloodline

Animal behaviorist September Day protects her broken heart by keeping everyone at arm's length. Still distraught over her husband's death in the line of duty, she heads back to her Texas home to launch a dog-training business. But her grief takes a back seat when her autistic nephew goes missing in a freak blizzard.
Partnering with the boy's support pup Shadow, September uncovers a shocking conspiracy hiding a deadly "miracle drug." Hounded by vengeful enemies, human and dog must learn to work together and sniff out the source of corruption before more vulnerable kids die.
Can September and Shadow forge a bond and stop a ruthless conspiracy and relentless killer?
Lost And Found is the first action-packed installment in the gripping September and Shadow series. If you like dark suspense, novice detectives, and courageous animals, then you'll love Amy Shojai's roller-coaster thrillers.
Buy Lost And Found to join the hunt for justice today!