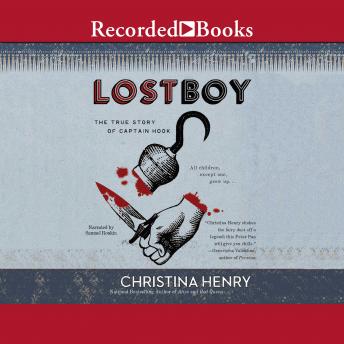 The author of Alice takes readers through a dark tale of Peter Pan, who turns his best friend into his nemesis, Captain Hook. On an island lives a boy called Peter and his band of merry lost boys, young forever. That is, unless they get sick or killed by pirates or eaten by crocodiles or unless-inexplicably-they grow old. For some of them do grow old, and nobody knows why. One of these boys is called Jamie, and he was the first boy that Peter ever brought to the island. Jamie's lived there for longer than he can remember, and it's not all fun and games. Peter thinks the boys are replaceable, that if one dies or grows up, he can swap in another from the Other Place, the place where he collects new playmates. Jamie looks out for the boys and takes care of them. He does everything Peter does not. Jamie tries to keep them alive because, to him, they matter. When Peter steals a boy who is too young, Jamie takes the boy under his wing. But Peter won't have that, for nobody will ever take Jamie from him. Ever.

"This isn't a wonderful place for boys to play and have adventures and stay young for always. It's a killing place, and we're all just soldiers in Peter's war." I loved the characters in this story and the writing was great. It was a really entertaining, quick read. I had lots of sympathy for Jamie.

extraordinary writing! Lord of the flies meets Fanny by Erica Jong. brutal, epic, engaging... I have always been suspicious of pan, this tragic tale reveals why.

I really love the narrator. I don’t usually like listening to male readers, but Samuel Roukin’s voice is just bang on. I can’t put my finger on precisely why. He emphasizes where emphasis needs to be, he pronounces well, he acts well, his pace is perfect. And he sounds exactly like how I’d imagine Captain Hook would sound. Fantastic narration! Couldn’t have been done better.

Amazing story! I love a creatively woven backstory based on classic characters.

Amazing! Words cannot describe how amazing this book was!