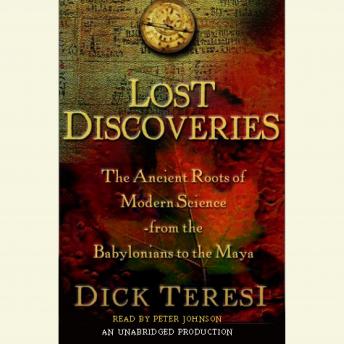 Lost Discoveries: The Ancient Roots of Modern Science from the Babylonians to the Mayans

Lost Discoveries, Dick Teresi's innovative history of science, explores the unheralded scientific breakthroughs from peoples of the ancient world -- Babylonians, Egyptians, Indians, Africans, New World and Oceanic tribes, among others -- and the non-European medieval world. They left an enormous heritage in the fields of mathematics, astronomy, cosmology, physics, geology, chemistry, and technology.

The mathematical foundation of Western science is a gift from the Indians, Chinese, Arabs, Babylonians, and Maya. The ancient Egyptians developed the concept of the lowest common denominator, and they developed a fraction table that modern scholars estimate required 28,000 calculations to compile. The Babylonians developed the first written math and used a place-value number system. Our numerals, 0 through 9, were invented in ancient India; the Indians also boasted geometry, trigonometry, and a kind of calculus.

Planetary astronomy as well may have begun with the ancient Indians, who correctly identified the relative distances of the known planets from the sun, and knew the moon was nearer to the earth than the sun was. The Chinese observed, reported, dated, recorded, and interpreted eclipses between 1400 and 1200 b.c. Most of the names of our stars and constellations are Arabic. Arabs built the first observatories.

Five thousand years ago, the Sumerians said the earth was circular. In the sixth century, a Hindu astronomer taught that the daily rotation of the earth on its axis provided the rising and setting of the sun. Chinese and Arab scholars were the first to use fossils scientifically to trace earth's history.

Chinese alchemists realized that most physical substances were merely combinations of other substances, which could be mixed in different proportions. Islamic scholars are legendary for translating scientific texts of many languages into Arabic, a tradition that began with alchemical books. In the eleventh century, Avicenna of Persia divined that outward qualities of metals were of little value in classification, and he stressed internal structure, a notion anticipating Mendeleyev's periodic chart of elements.

Iron suspension bridges came from Kashmir, printing from India; papermaking was from China, Tibet, India, and Baghdad; movable type was invented by Pi Sheng in about 1041; the Quechuan Indians of Peru were the first to vulcanize rubber; Andean farmers were the first to freeze-dry potatoes. European explorers depended heavily on Indian and Filipino shipbuilders, and collected maps and sea charts from Javanese and Arab merchants.

Lost Discoveries: The Ancient Roots of Modern Science from the Babylonians to the Mayans

This title is due for release on November 5, 2002
We'll send you an email as soon as it is available!