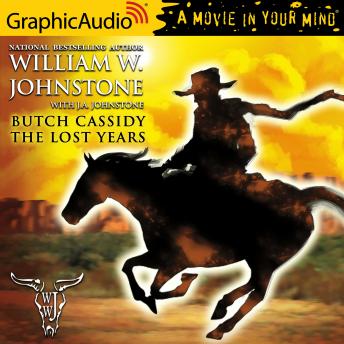 On November 3, 1908, in the town of San Vicente, suspected of stealing a mining company payroll, Butch Cassidy was killed in a bloody shootout by the Bolivian Army. Or was he? In a small Texas town in 1950, a man from the Pinkerton Detective Agency interrupts an old-timer's daily game of dominos to learn the truth about Butch Cassidy--who is still alive and well and sitting right in front of him... So begins the novel of the West's most legendary outlaw--as told by America's master storytellers, William W. Johnstone and J.A.Johnstone. Butch Cassidy The Lost Years reveals the stunning secret behind that infamous shootout in Bolivia that claimed the lives of the Sundance Kid and, allegedly, Butch himself. For years, there were rumors that Cassidy survived. Now, almost half a century later, an old man playing dominos tells the real story of his life and times, legend be damned. After fleeing South America and informing the beautiful Etta Place that her beloved Sundance is dead, Butch returns to Texas searching for a place to call home. When he comes across a dying rancher who'd been shot by some rustlers, Butch promises to avenge him--and take over the ranch after his death. Assuming the name Jim Strickland, Butch tries to start a fresh new chapter in his life. But even with his old gang gone and his outlaw past behind him, trouble has a way of finding Butch. Cruel injustice--in the form of a corrupt railroad baron--pulls him into the most dangerous train robbery he's ever attempted. But if Butch Cassidy is going to ride again, it'll have to be with a newer, and wilder, Wild Bunch...