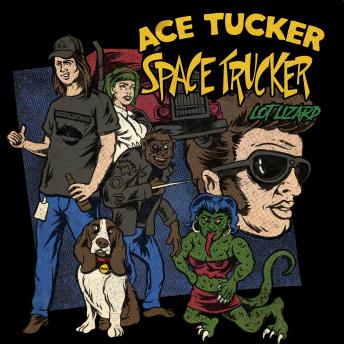 After Ace Tucker and his best friend (a Russian cyborg chimpanzee named Ivan Chimpanov) met Elvis Presley at a party, their fates became intertwined with a conspiracy that brought them to Earth in search of a super secret time machine built into Elvis's prized 1959 Cadillac Eldorado Biarritz. With the help of a spitfire KFC cashier named April Massey and Hank, the foul-mouthed talking Basset Hound, Ace and Ivan traveled across space and time (and at least one alternate universe) to defeat an evil Andromedan alien called the Shiny Man. Their victory ensured Elvis Presley lived on to become the leader of the galaxy in the far distant future. As if that wasn't unexpected enough, Ace and the gang also got a sweet new gig working for the Temporal Continuity Bureau (T.C.B.), the Galactic Union's very own time-traveling police force. However, before the crew could get into the thick of it as fully licensed, bonded, and insured T.C.B. agents, they had some dues to pay...