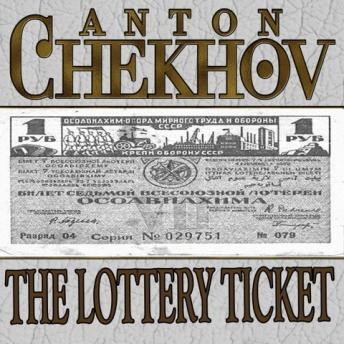 When Ivan Dmitritch's wife, Masha, invests her money in the lottery, he can help but feel it is a foolish waste of timing. However, having read through the rest of the paper, he agrees to check the numbers for his wife at her request. To his astonishment, the series number of Masha's lottery ticket matches the winning series number. Without checking the rest of the number needed to win, both husband and wife quickly begin to fantasize about what they would do if they won the lottery. Their happy thoughts quickly turn to anger and hostility towards one another as they become greedy over the money. It is only then that Ivan consents to checking the final number to see whether or not their musings would come true.
Anton Chekhov (1860-1904) was a Russian writer and playwright, considered by many to be one of the best writers of short stories in the history of literature. Chekhov was also a successful physician, but writing was his true passion. He was quoted as saying 'Medicine is my lawful wife and literature is my mistress.'