The Lotus Eaters: A Novel 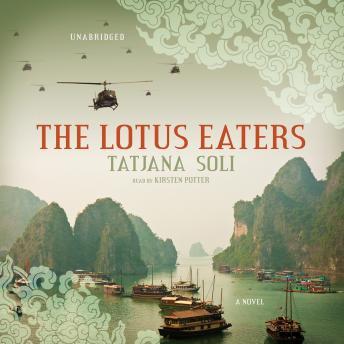 The Lotus Eaters is a sweeping debut novel following the story of Helen Adams, an American combat photographer covering the Vietnam War, as she captures the chaos of the conflict on film, breaks into the "man's world" of war photojournalism, and finds herself torn between the love of two men.

It's 1975, and the North Vietnamese army is'poised to roll into'Saigon. As the chaos of the fall of the city begins in earnest, two lovers make their way across the city to escape to a new life. Helen Adams, an American photojournalist, must take leave not only of a war she is addicted to, but of a devastated country she has come to love. Nguyen Pran Linh, the man who loves her, must deal with his own conflicted loyalties, both of heart and homeland. As they race through the streets, they play out a drama of love and betrayal that began twelve years before in the splendor of Angkor Wat, with their mentor,'the larger-than-life war correspondent, Sam Darrow.

Once, Darrow was Helen's infuriating love and fiercest competitor, as he was Linh's secret keeper, protector and'truest friend. But Darrow is gone now, and the "splendid little war" they made their names covering has come to a most surprising, and yet obvious end. As the sun sets on their life in Saigon, Helen and Linh struggle against both their inner demons and the ghosts of the past, illuminating the wrenching horrors of war, the dangerous narcotic of obsession, and the redemptive power of love.