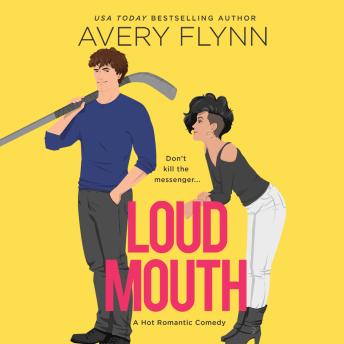 I never meant to say a word, not one single word. But I did.

And now, because of my blog, everyone knows that Ice Knights hockey star Ian Petrov’s best friend and fellow player is actually his half-brother—hello, hockey Hall of Famer dad who couldn’t keep his jeans zipped.

That wouldn’t be such a big deal if Ian knew. He didn’t, and boy howdy is he pissed. And who is he most mad at? Oh sure, he’s upset with his dad and former best friend/brother from another mother, but most of his ire is with me. It’s definitely a case of hating the messenger.

And what could make it worse? How about the two of us being trapped together in a remote cabin after a massive blizzard. Neither of us can leave. Just us, the snow, his resentment, and OMG sexual tension so thick it would take a snowplow to break through it.

I’ve got to get out of here before I do something even dumber than I’ve already done and kiss the sexy snarly grump with his misplaced anger and perfect pecs. That would be the worst, the absolute worst. That’s why I’m not going to do it. Nope. Really. So why can’t I stop imagining what it would be like?