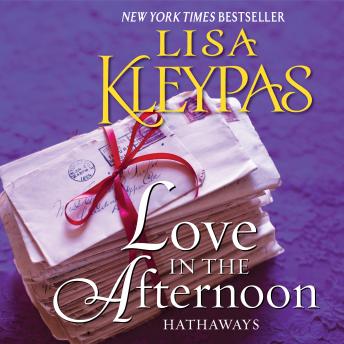 Love in the Afternoon: A Novel

Beatrix Hathaway would much rather spend time with her collection of rescued animals than flirting in a stuffy ballroom. If her unconventional behavior earns the mockery of handsome rakes like Captain Christopher Phelan, so be it. She’d rather stay true to herself, even if it means never finding love.

Christopher’s courtship of Beatrix’s friend, the vivacious but flighty Prudence Mercer, is interrupted when his regiment is sent to fight in the Crimea. After a particularly devastating battle, he writes a letter to Prudence, unaware that the spoiled beauty has decided she doesn’t want to wait for him.

Since Prudence won’t reply to the world-weary soldier, Beatrix offers to write a letter for her—and she signs it as Pru. A lively, witty correspondence begins, and gradually turns into something deeper as they share the secrets of their hearts. To Beatrix’s despair, she’s fallen for a man who thinks she’s someone else, and she’ll never be able to reveal her deception.

Christopher, now a decorated hero, comes back to claim the woman he loves. Soon, however, he realizes Prudence is very different from her letters . . . and he’s bewildered by his inexplicable attraction to the eccentric Beatrix Hathaway . . .

Such a wonderful way to end the series! I really enjoyed this book. Well worth the “read!”

great book. throughout the series I was wondering what kind of man would end up with Bea. I was happy with the answer.