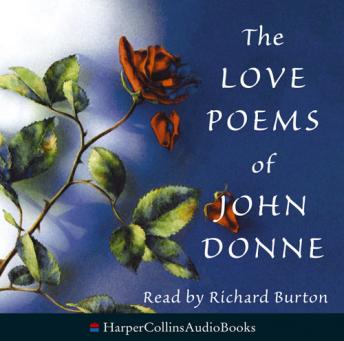 The Love Poems of John Donne

Read by Richard Burton in a manner that truly does justice to the virtuosity to the love poems of England's most outstanding Metaphysical poet, bending both meaning and sound to the service of the Metaphysical conceit.Donne's poetry embraces a wide range of secular and religious subjects. He wrote cynical verse about inconstancy, poems about true love, Neoplatonic lyrics on the mystical union of lovers' souls and bodies and brilliant satires and hymns depicting his own spiritual struggles.Whatever the subject, Donne's poems reveal the same characteristics that typified the work of the metaphysical poets: dazzling wordplay, often explicitly sexual; paradox; subtle argumentation; surprising contrasts; intricate psychological analysis; and striking imagery selected from nontraditional areas such as law, physiology, scholastic philosophy, and mathematics.Expertly recited by Richard Burton, John Donne's love poetry stands alone as one of England's greatest ever love poets.