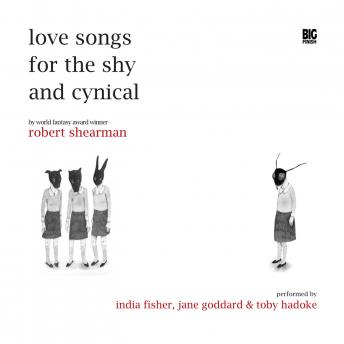 Love Songs for the Shy and Cynical (Audiobook)

The first love song in the world, as composed by a pig in the Garden of Eden. The Devil, alarmed when his hobby of writing romantic fiction begins to upstage his day job. Hearts kept in Tupperware boxes, small countries that vanish from the European mainland overnight, and a kidnapper who gets more than he bargained for when his victim associates him with George Clooney.

It could only be Robert Shearman's 'Love Songs for the Shy and Cynical'. Six stories of the comic and the frightening and the downright weird, taken from his multi-award winning short story collection.

"Shearman offers us haunting, nightmare alternatives to our world. He makes each story cling to you, forces you to make sense of it and somehow inhabit it." Steven Moffat, executive producer of Doctor Who.

"His stories are like the bastard offspring of Philip K Dick and Jonathan Carroll, but with a quirky personality that is completely their own." Stephen Jones, World Fantasy award winning editor of Best New Horror.