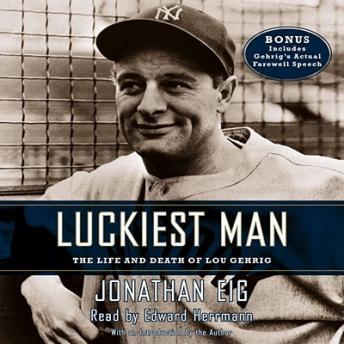 Luckiest Man: The Life and Death of Lou Gehrig

The definitive account of the life and tragic death of baseball legend Lou Gehrig.

Lou Gehrig was a baseball legend—the Iron Horse, the stoic New York Yankee who was the greatest first baseman in history, a man whose consecutive-games streak was ended by a horrible disease that now bears his name. But as this definitive new biography makes clear, Gehrig’s life was more complicated—and, perhaps, even more heroic—than anyone really knew.

Drawing on new interviews and more than two hundred pages of previously unpublished letters to and from Gehrig, Luckiest Man gives us an intimate portrait of the man who became an American hero: his life as a shy and awkward youth growing up in New York City, his unlikely friendship with Babe Ruth (a friendship that allegedly ended over rumors that Ruth had had an affair with Gehrig’s wife), and his stellar career with the Yankees, where his consecutive-games streak stood for more than half a century. What was not previously known, however, is that symptoms of Gehrig’s affliction began appearing in 1938, earlier than is commonly acknowledged. Later, aware that he was dying, Gehrig exhibited a perseverance that was truly inspiring; he lived the last two years of his short life with the same grace and dignity with which he gave his now-famous “luckiest man” speech.

Meticulously researched and elegantly written, Jonathan Eig’s Luckiest Man shows us one of the greatest baseball players of all time as we’ve never seen him before.

Luckiest Man: The Life and Death of Lou Gehrig

This title is due for release on April 6, 2005
We'll send you an email as soon as it is available!