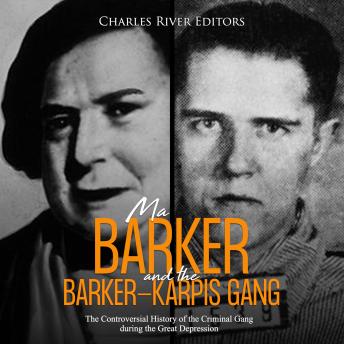 Ma Barker and the Barker-Karpis Gang: The Controversial History of the Criminal Gang during the Great Depression

Among America’s most infamous “Public Enemies,” perhaps the most unique and controversial was Kate Barker. With her prominent, hawk-tipped nose and plump, doughy face, framed by a classic dark curly coif and frilly day dresses to match, Ma Barker was as non-threatening as they come. Nary a second glance was given to this grandmotherly figure by those who crossed her path, perhaps at most a polite tip of the hat. Of course, as the age-old adage goes, appearances are often deceiving. According to the FBI and portrayals in popular culture, not only was Ma Barker a crass, greedy, and highly manipulative individual who coaxed her sons into the abyss-like vortex of criminality, she was the matriarchal mastermind of one of the most notorious gangs of the Dirty Thirties era.

The Ma Barker Gang, as they were so branded, wasn't a typical band of small-time crooks. Quite the contrary, the unorthodox family-run enterprise was, as described by FBI Director J. Edgar Hoover, “the most vicious, cold-blooded crew of murderers, kidnappers, and robbers in recent memory.” The gang was as accomplished – and dangerous – as it was elusive, and between 1930 and 1933 alone, they made off with an estimated $3 million. In their heyday, the gang boasted some 25 members, and through it all, the Barker boys remained its core members. Blood, as per the Barker code, would always be thicker than water.

The obvious novelty of the alleged gang leader's identity aside, the disturbing fates of the Barker brothers and many of their associates served as a cautionary tale about the dangers and delusions that ensue when one becomes consumed by unbridled avarice and arrogance. But why were the Barker brothers, once innocent young lads, steered so far off the path of righteousness? What was the true depth of Ma's involvement in the gang's laundry list of despicable crimes? How did the once untouchable gang's winning streak culminate in such catastrophic disaster?

Ma Barker and the Barker-Karpis Gang: The Controversial History of the Criminal Gang during the Great Depression